What follows are a list of language-agnostic principles and best practices I have found to be quite helpful when writing unit tests. Let me know what I missed in the comments!

This article was inspired by the knowledge-base I've been developing lately. It's sort of a living career cheat-sheet. I highly recommend any developer to do the same. I can't count the number of times I've forgotten a cool trick or principle I've learned. No longer!

Factory - A function which simplifies the construction of some test dependency (arguments, objects, etc.).

Test-Driven Development (TDD) — A programming discipline which emphasises writing tests as a part of code design, as easy of testing is a good indicator of code quality.

Behavior-Driven Development (BDD) — A approach to writing tests which focuses on specification and user-facing behavior.

Unit/System Under Test (SUT)/Test Subject — The simplest piece of self-contained functionality. It could be as simple as a method, or as complex as a class, but should be isolated sufficiently from collaborators.

Test Case — One atomic test (usually implemented as a function) which runs some code and makes assertions about it.

Test Double* — A generic term for any kind of pretend object used in place of a real object for testing purposes. Specific examples given below:

Keep irrelevant data and setup out of tests

Factories should only provide minimal amount of data required to statisfy the SUT's interface. 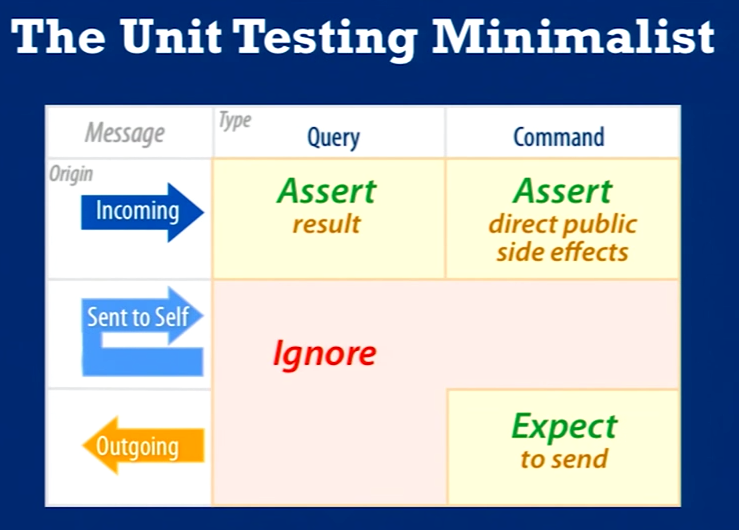 From “The Magic Tricks of Testing” by Sandi Metz

Each test should only verify one behavior

Verifying one behavior != making one assertion, although this is usually the case.

Fixtures are inflexible and necessitate a lot of redundancy. If the shape of your data changes, you have to change it in every single fixture. Use factories instead. Create all data/objects your test needs inside the test.

Many testing frameworks offer an xUnit-style syntax (suite/test) and a BDD-style syntax (describe/it). The latter helps to nudge the developer in the direction of testing in terms of specifications and external behaviors rather than implementation details and read a little more naturally.

Use common set of variable names

You will find yourself setting many variables which do the same thing in tests. Why try to come up with creative names for them, when you can just use one from a pre-defined set? Examples: subject, expected, result, actual, etc.

Omit it and should in test description

These are implied, and removing them keeps descriptions short.

Don't rely on shared state set up in a before/beforeEach blocks. This makes your tests easier to reason about and minimizes the possibility of flaky tests.

If you're tempted to share state for performance reasons, don't do so until you have actually identified a problematic test.* Also realize that sharing state between tests eliminates the possibility to parallelize your tests, so you may end up with slower overall test run times by introducing shared state.

* Requiring teardown in a test is a code-smell and is usually the result of stubbing a global method which should be passed in as a dependency.

Benefits of following these principles